BSP KW PAS passive brackets have been designed for stricter regulations regarding thermal insulation parameters of exterior partitions. Structural function of the brackets is to transfer the loads from the facade to the building structure. Fixed brackets transfer both vertical and horizontal loads while sliding brackets transfer only horizontal loads. They are fixed with two and one anchor, respectively. Innovative shape and materials used to produce brackets result in a relatively high load capacity and very favorable thermal parameters. Thermal bridges phenomenon is greatly reduced thanks to this solution.

KW1 PAS, KW2 PAS and KW3 PAS passive brackets consist of aluminium elements and a thermal insulation spacer made of epoxy-glass laminate (thermal conductivity coefficient λ=0,36  [W/(m*K)]).  Mechanical properties of the separator have been tested in the Department of Building Materials Engineering at Building Research Institute (ITB). Test results are described in the report no. LZM00-02956/16/Z00NZM. The separator is connected to aluminium elements with stainless steel rivets.

BSP systems should be installed in accordance with the workshop design prepared by engineers and designers with sufficient knowledge in the field of construction and building. The layout of the structure and the spacing between the elements (strength and resistance of the entire system) should be confirmed by the static calculations prepared by the engineer with qualifications in the filed of construction and building. 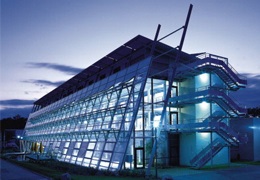